Young people across the East of England are being given the chance to play their part in creating a cleaner and greener future by ScottishPower Renewables, which is searching for its next apprentices to work on its pioneering East Anglia ONE offshore windfarm. 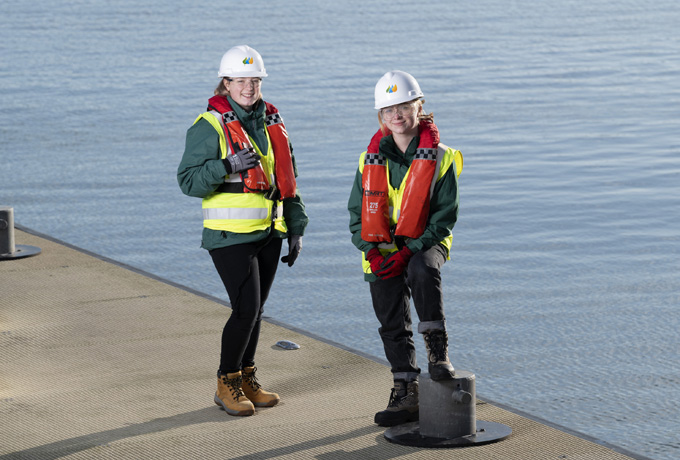 Leading on from last year’s successful inaugural scheme, the apprentices will experience essential hands-on training from programming to mechanical assembly and even vital sea survival training, as well as studying towards a nationally-recognised qualification.

The three-year apprenticeship will be based at East Anglia ONE’s state-of-the-art operations and maintenance building at Hamilton Dock, Lowestoft; a key part of a £25 million investment made by ScottishPower Renewables into the port.

Jovita, who studied engineering at college before securing her apprenticeship, commented:
“Joining ScottishPower Renewables has been an absolutely amazing experience from day one. Each day is different and I love getting up every morning knowing I am working in one of the country’s key growing sectors. Seeing how it develops day by day, and learning from such an experienced team, is an incredible opportunity. I love knowing I am playing my part in creating a green future.”

Hope, who along with Jovita is one of only two women on their college course, commented: “Securing this apprenticeship was such a great first step for me, both professionally and personally. I’ve always wanted to work in renewables and am learning so much, I’m loving every minute.”

ScottishPower Renewables’ Offshore Apprentice programme brings together both academic and technical skills training through work-based learning and college assessment. As well as earning a competitive salary, successful applicants will kick-start their career with a nationally-recognised qualification and gain crucial on-the-job experience and knowledge.

Steven Hodger, principal site manager for East Anglia ONE at ScottishPower Renewables, commented:
“Jovita and Hope have been a huge success as our first apprentices at East Anglia ONE and are a great addition to the team. It’s been fantastic to see them thrive at college and on site and we can’t wait to welcome our second group of apprentices. Not only will our programme give you an excellent grounding for your future career, it also offers opportunities you’ll be hard pressed to find anywhere else.

“Health and safety is at the heart of East Anglia ONE and will be a big part of your education. As you’ll be working offshore, we’ll put you through the indispensable GWO Sea Survival and Vessel Transfer course. We’ll also teach you to understand the core materials used in the wind sector so you can help with the operation and maintenance of our wind farms.

“This is a fantastic opportunity open to anyone of any age, which will give you the skills and experience to make you really stand out from the crowd for years to come. If you’re passionate about our industry, a competent swimmer and comfortable working at heights we want to hear from you.”

East Anglia is leading the way as a major centre for renewable energy thanks to East Anglia ONE and the offshore wind sector. ScottishPower Renewables has placed the region at the heart of its ambitious skills strategy, bringing a wealth of benefits to the local economy and job market. To date, it has engaged thousands of people with STEM through its primary skills post-education training, secondary school education training and INWED (International Women in Engineering Day) activity.

East Anglia ONE apprenticeship applicants will need four GCSEs at grades A-C / 4-9, or equivalent, in maths, English and a science to be considered for the role. Successful candidates will study Level 3 Mechatronics Pathway at East Coast College so are advised to live within 30km of Lowestoft.

Candidates will need to complete an online application before being considered for online testing and a video interview. If successful, applicants will then be invited to carry out swimming and climbing tests at an assessment centre, followed by a further interview.

Technical features of East Englia ONE